The Welsh Government is backing recommendations to give local authorities additional civil enforcement powers to tackle pavement parking, while a Department of Transport (DfT) consultation is currently underway to hear views on possible options for authorities in England (outside London) to address the issue.

Earlier in October, the Welsh Government announced that it had accepted all of the recommendations made by the Welsh Pavement Parking Task Force Group, which had been asked to examine ways to tackle pavement parking in towns and cities across Wales. The group includes Caroline Sheppard OBE, Chief Adjudicator of the Traffic Penalty Tribunal, and PATROL Director Louise Hutchinson, alongside officers from Welsh local authorities and the Welsh Local Government Association and the British Parking Association.

The recommendations from the Task Force Group, which the Welsh Government accepted all of in principle, were focused on the premise that parking on the pavement should be ‘…tackled by changing driver behaviour through raising awareness that pavements are for pedestrians and not for vehicles, backed-up by the deterrent of effective enforcement.’

View the recommendations as part of the Welsh Government’s response here>>.

Deputy Transport Minister, Lee Waters MS, said: “We recognise that in some streets there are too many cars for the space available and we don’t want to penalise people who have no alternative. This approach lets Councils target hot spots and vary its approach depending on local circumstances.”

While further policy development and consultation is set to take place, the intention of the Welsh Government is for enforcement to commence by July 2022, with a communications plan and promotional strategy to launch prior to this date. The operation of the new scheme will be ‘closely monitored and evaluated to ensure success and identify any further changes that may be needed.’

The Department for Transport (DfT) is currently running a consultation Pavement parking: options for change, which is due to close on 22 November 2020.

The consultation follows work by the Government in 2019 to gather evidence on the problems caused by pavement parking, as well as possible solutions. This included an Inquiry>> by the House of Commons Transport Committee last year into the issue of pavement parking in England (with a report>> published in September 2019), during which PATROL advocated for the introduction of highway obstruction by a stationary vehicle to the list of contraventions for which civil enforcement applies, contained in Part 1 of Schedule 7 of the Traffic Management Act 2004.

The DfT’s latest consultation is focused on three potential options for local authorities in England (outside London) to tackle pavement parking:

Further information on the DfT consultation, including detailed overviews on the advantages and disadvantages of the three options can be found on the consultation web page>>.

Next steps for PATROL

For any questions regarding PATROL’s position in advance of the briefing document, please contact:

PATROL’s initial submission to the Inquiry was based on the original briefing document and encompassed later feedback received from PATROL member authorities. Access a copy here>>

PATROL was asked to give oral evidence to the Transport Committee on Wednesday 19 June 2019. This was provided by Louise Hutchinson, Director, PATROL. Other representatives invited to give evidence during the session included: 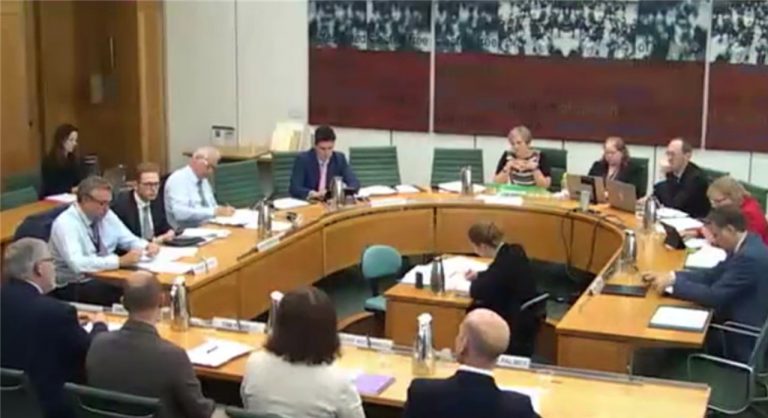 Louise was asked a number of questions focused on the procedural and political implications of implementing a national ban (including the role of Traffic Regulation Orders [TROs]), which preceded further questions around alternative solutions, including the introduction of highway obstruction as a new civil enforcement contravention. This followed an earlier session, which focused on the impact of pavement parking on people and vulnerable groups. 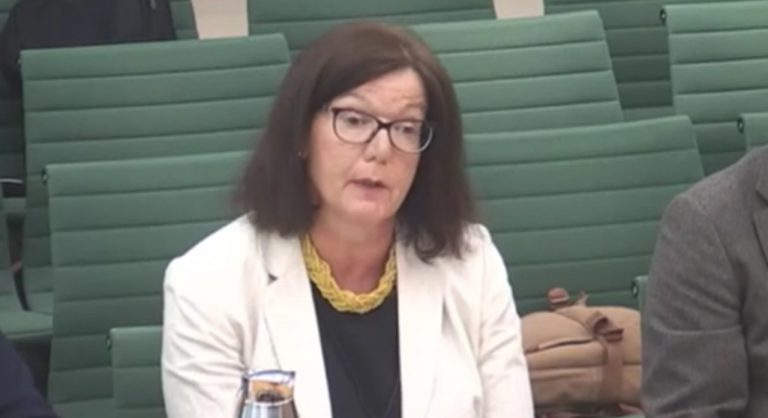 Read a transcript of the full session here>>

PATROL provided an additional submission to the Inquiry, expanding on some of the points that came up during the earlier oral evidence session. Access a copy here>>

The Chief Adjudicator of the Traffic Penalty Tribunal, Caroline Sheppard OBE, in consultation with Louise Hutchinson, provided a further submission to the Inquiry, concerning a potential Behaviour Change Strategy to tackle the issue of pavement parking. Access a copy here>>

Background to the issue

The challenge of pavement parking

As of July 2019, Lee Waters AM, Deputy Minister for Economy and Transport, Welsh Government, announcement that a Taskforce Group was to be set up to consider the issues around pavement parking and to decide how best to implement a solution to this problem in Wales.

I returned to my vehicle and there was a Penalty Charge Notice (PCN) on my windscreen. What should I do?

Pay: You only pay 50% of the full penalty if you pay within 14 days (taking Day 1 as the date on the PCN). After 14 days, the penalty increases to the full amount. In any case, payment needs to be made within 28 days, beginning with Day 1. Find out how to pay here.

Can I pay the discounted rate of my Penalty Charge Notice (PCN) and then appeal to the adjudicator?

No. To appeal you must follow the appeals procedure – find out more here. If you pay, the authority will consider the matter closed. If the discounted rate has been re-offered, an appeal does not preserve that offer and it will be lost.

Has my Penalty Charge Notice (PCN) been paid?

Contact the local authority that issued the ticket to check the status of the PCN. Their details will be on all correspondence received, or can be found here.

I have been contacted by Civil Enforcement Agents (formerly bailiffs). What should I do?

If you have received a court order and payment of your penalty is not made within 21 days of the court order being served, the authority will obtain a warrant from the County Court and Civil Enforcement Agents will be instructed.

Pay: You must pay the Civil Enforcement Agents.

Challenge: Contact the Traffic Enforcement Centre (TEC) to make an ‘Out of Time Witness Statement’ as to why the debt has not been paid or representations submitted.

I have received a Charge Certificate from the authority. What should I do?

If you do not pay the penalty or make representations against a Notice to Owner (NtO) or Penalty Charge Notice (PCN) served by post by the end of the maximum 28-day period, the authority will send you a Charge Certificate: this increases the penalty by 50%.

Pay: Contact the authority to pay the increased charge.

At this stage, it is possible to make a witness statement (or statutory declaration for bus lane PCNs) challenging the court order on one of four grounds. These are explained within the TEC documentation you will receive.

If you did not receive a postal PCN / Notice to Owner or the Notice of Rejection, it may still be worth challenging although the authority is not obliged to consider representations at this stage.

I have received a littering from vehicle Penalty Notice (PN) through the post. What should I do?

Your options are as follows:

Pay: If you do not pay within 28 days of receiving the Penalty Notice, the penalty increases by 100%.

Challenge: Follow the instructions on the reverse of the Penalty Notice and submit your challenge to the authority in writing.

I have received a Notice of Rejection of Representations (NOR) with an online code. What should I do?

Pay: You need to contact the authority to pay the full penalty, or the discounted penalty if they have re-offered it.

Challenge: The NOR provides information on how to appeal to the Traffic Penalty Tribunal (TPT). Your appeal should be submitted within 28-days of receipt of the NOR.

Please note that you can either pay or challenge but may not do both.

I have received a Notice to Owner (NtO). What should I do?

Pay: Follow the instructions on the NtO. Find out more about the payment process here.

Challenge: It is best to use the NtO form (with extra sheets attached if necessary) to make your representations. The NtO explains the grounds for representations. Taking ‘Day 1’ as two working days after the date the NtO was posted, representations need to reach the authority with 28 days. Find out more about the ‘Challenge’ process here.

I have received a parking, bus lane, road user or moving traffic Penalty Charge Notice (PCN) through the post. What should I do?

PCNs are served through the post when a contravention has been captured on CCTV (parking, bus lane, road user or moving traffic PCNs), or where it has not been possible to place the PCN on the vehicle or hand it to the driver (parking PCNs only).

Pay: You only pay 50% of the full penalty if you pay within 14 days (taking Day 1 as two working days after the PCN was posted); or 21 days if the PCN was served for a parking contravention captured on CCTV. After the 14- / 21-day period, the penalty increases to the full amount. In any case, payment needs to be made within 28 days, beginning with Day 1. Find out how to pay here.

Challenge: Follow the instructions on the reverse of the PCN and submit your challenge to the enforcement authority in writing. If you make your challenge within 14 days the authority is more likely to re-offer the discount if the challenge is rejected.

I have received a Penalty Charge Notice (PCN) from a London Authority, what should I do?

I have written to the authority and they are rejecting my challenge. What should I do?

This is often known as an informal rejection. Your options in this situation are as follows:

Pay: The authority will usually extend the 14-day discount period if your challenge was received before the end of the original discount period. Find out how to pay here.

Challenge: If you still believe the penalty should not be paid, you should wait to receive a Notice to Owner (NtO) from the authority. Please note that the NtO will be issued to the owner of the vehicle.

Find out more about the ‘Challenge’ process here.

I want to pay my Penalty Charge Notice (PCN). What should I do?

I was parked on private land and my ticket was issued by a private company. What should I do?

Private companies fall outside the statutory remit of civil parking enforcement by local authorities, so if a private company has issued your ticket, you should contact the company and follow their appeals procedure.

My vehicle was clamped / removed by the authority. What should I do?

Pay: You need to pay the necessary charges to release the vehicle.

Challenge: Even though you have paid the release fee, you can still make representations. Follow the instructions on the release notes you received following payment and write to the authority. If your written representations are unsuccessful, you may then appeal to the independent adjudicator.

Where can I find details on the Contravention Code included on my Penalty Charge Notice (PCN)?

A full list of Contravention Codes can be found here.

Skip to content
We use cookies to ensure that we give you the best experience on our website. If you continue to use this site we will assume that you are happy with it.Ok